Many of us are scared, confused, overwhelmed, enraged, disconnected, ashamed, and/or sad with what is happening in the world. We are stressed and holding that energy in our bodies regardless of our racial identity.

We need community and opportunities to sort through our feelings and conditioning, cope and heal from stress, and find our voices as racial beings in a way that embodies fierceness and love.

Antiracism is a practice, a muscle to be developed, if we are interested in collective liberation.

Join Antiracism Revolution membership community today so you can move from surviving to thriving. Don't wait a minute more to join the community where curiosity about ourselves and others as racial beings, skill building, and empowerment is our focus.

​We are stronger together. 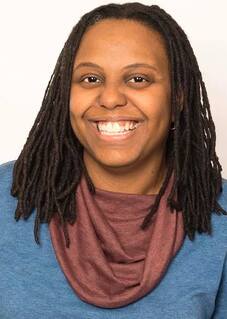 What lens does Dr. Nathalie Edmond bring to this membership site?

​black, cis female, fat, middle (upper middle) class, married to a cis white man, queer psychologist who is mother to two neurodiverse black biracial kids; daughter of Haitian immigrants; daily meditator; yoga teacher; trauma therapist who integrates mind-body-spirit and been trained in somatic approaches; owner of group practice that is centered in social justice; having been in a predominantly white group practice; having been a director in large behavioral health institutions; worked in an ivy college counseling center; been on various non profit boards; DEIJ/anitracist consultant; and see racial justice as a spiritual practice informed by black buddhist teachers and black feminist ideology; sees herself as a budding abolitionist

Basic membership is great for those wanting an engaged antiracism community without process groups or webinars. You have access to yoga class and meditation recordings. Bi-weekly livestream recordings from Nathalie on various antiracism topics. Includes recording of antiracist parenting webinar and NAACP policy reflections. $69 for a year of access!

Basic Plus Webinar membership is for those who want a little more in terms of recordings of some of the workshops/webinars but no affinity spaces and don't want all of the recordings from the standard membership. Great if you don't plan to go to workshops live and yet still want to be engaged and learning.  Includes monthly recordings of workshops/webinars hosted in the community and will include DEIJ series in fall 2022.  Annual plan.

Premium membership includes all that basic and standard has to offer plus additional series and workshops as well as periodic CE events for therapists.  Includes recordings such as Antiracism in Therapy Room (3 hours) and Racial Trauma and Antiracism (3 hours).  Includes upcoming 3 part series: Race Talk: Intergenerational trauma, privilege, power and oppression.  Choose the Premium membership that best affirms your racial identity, either White or BIPOC/global majority affinity space. Monthly and annual plans until December 8.  Annual plan starting after that.

Lower price for BIPOC identifying individuals as they continue to heal from generations of racial trauma, oppression and income disparity. When I think of BIPOC I think of those who have been socialized as a black, indigenous, brown, latinx, asian or others in the global majority who do not pass for white or haven't been socialized as white.  The BIPOC affinity space gives opportunity to engage away from the white gaze.

The white affinity space is for those who pass or present or identify as white (i.e. have advantage of people perceiving you as white). White people would be causing harm by choosing BIPOC affinity space.

If you identify as biracial or multiracial I invite you to think about what affinity space most resonates with the way you have been socialized and identify.

Team options: purchase memberships for your team with their own private space to communicate with each other while still having access to the larger community. Standard access, affinity space, and one CE workshop a year. Plus Racial Trauma and Antiracism recording. Upcoming Race Talk Series. Contact Dr. Nathalie Edmond to discuss more.

If you are interested in purchasing memberships for multiple people please contact Dr. Edmond to explore options.
Check out pricing and join!

focus of this revolution

RACISM and white body suprmeacy shows up in our society (every community and institution) in a lot of different ways.

It may look different across generations. We have to become really good at seeing how it shows up around us and talking about how it has harmed us.  HOW HAVE YOU BEEN COMPLICT, ADVANTAGED, UNAWARE AND/OR HARMED BY THE EXISTING FORMS OF OPPRESSION? I often think about how my education and class privilege, being neurotypical, being a US citizen, not being disabled or vulnerable in terms of mental health protects me a little bit from forces of racism.
​Picture below from dismantlingracism.org 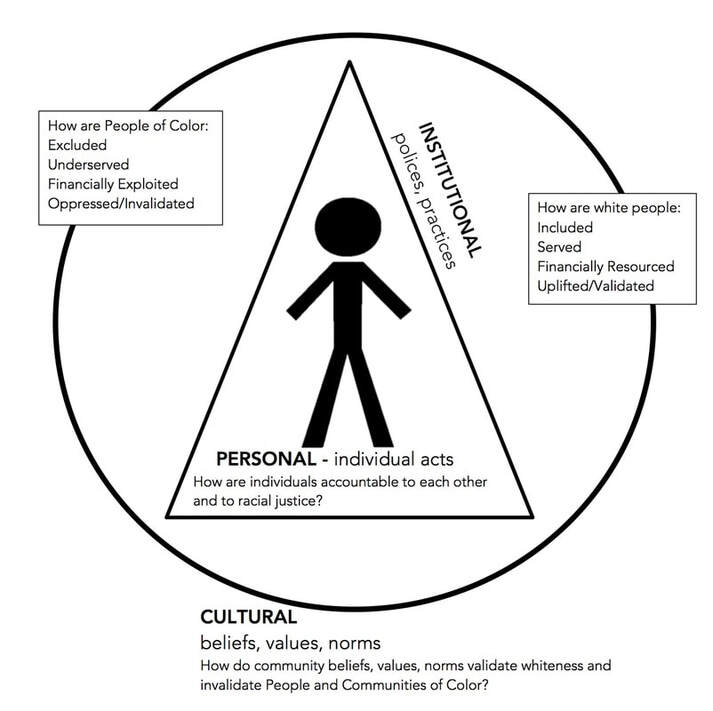 We have to create an alternative path of talking about racism and healing where people or not just racist or not racist. We have to move away from cancel culture which is part of white body supremacy.

Can we imagine creating a world where people can admit wrongdoing, do the work of getting educated and make repairs? Have a path of redemption. Can we move away from being a shaming and punitive culture that truly values all lives and believes people can change and they are not judged solely on the worst things they did?

Can we imagine having passionate conversations with people who have a different opinion in the context of intimacy rather than dehumanization?

I see the people doing racial harm and I wonder what happened to you? Can you do better? What supports do you need? Can you help co-create a better world where there is accountability and collaboration and abundance mindset?

What are underlying assumptions that we are working to understand and disrupt? Check out this video about critical race theory.

to be inclusive We have to take an intersectional lens as we don't show up as one identity and everything is connected.
​I appreciate the principles of disability justice 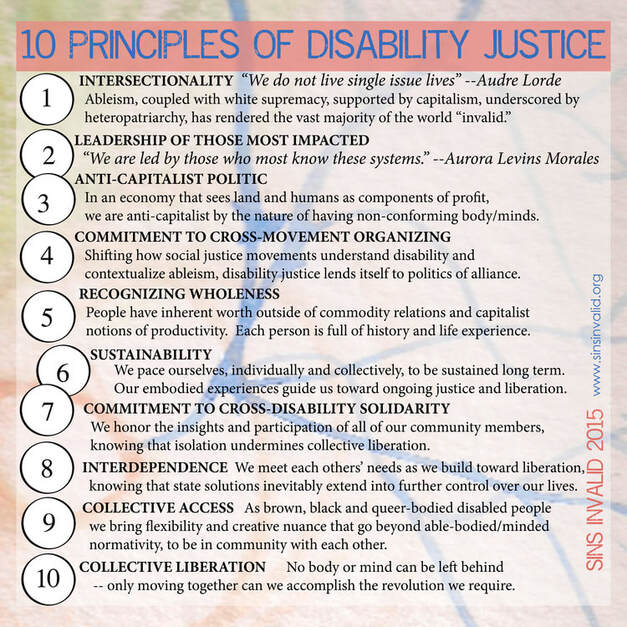 Change starts with you.  It can't just be a cognitive change or filled with good intentions. It has to be embodied.

This membership will center ourselves as racial beings. Explore the different ways we have been conditioned and look at intersecting identities. It is meant to support you on the journey to make mindful choices about how to be engaged in antiracism in your daily life. Our circles of influence are where we can cause harm and where we can also help heal and disrupt white body supremacy and antiblackness.
Email Dr. Edmond
with questions, suggestions and topics that would support your antiracist journey
Want to schedule a training for your team? Learn more here about a one time workshop or a series